Basement people of the world, I’m back!

I’m so sorry for the lack of posts, as I’ve mentionned on instagram and twitter I’ve had very little internet recently so I couldn’t update the site. I’m back now, and I’ve got some catching up to do!

First of all, a very happy belated birthday to the one and only Ben Thompson! Many of you wished him a good one via twitter, for those of you who don’t know Ben turned 25 on the 6th of August! It’s a bit late, but I do like to share birthday wishes on the site for our favourite musicians, and better late than never, so here’s to Ben!

I also wanted to remind the world that, somehow, it’s been over four years since this happened:

To this day I think this was one of my biggest Two Door moments. I’ve had a lot of big ones, but this was something else, it brought everything to a whole new level. I remember it very well even now. The band had been tweeting out all day about how we should definitely watch the ceremony, and we were all joking about how it would be amazing if Two Door performed, knowing full well that wouldn’t happen. And yet it sooort of kiiind of did. Four years on and I still listen to Caliban’s Dream with a sort of pride, that of all the people they could have chosen to sing that song they chose Alex, our Alex. No better man if I may say so myself, the song is perfect for him, and he for it! What a beautiful memory for all of us to share, I hope you enjoy reliving it as much as I did!

In other news the band have announced more dates inclduing some in Japan. Check out all the dates here (click on live dates at the bottome of the page). 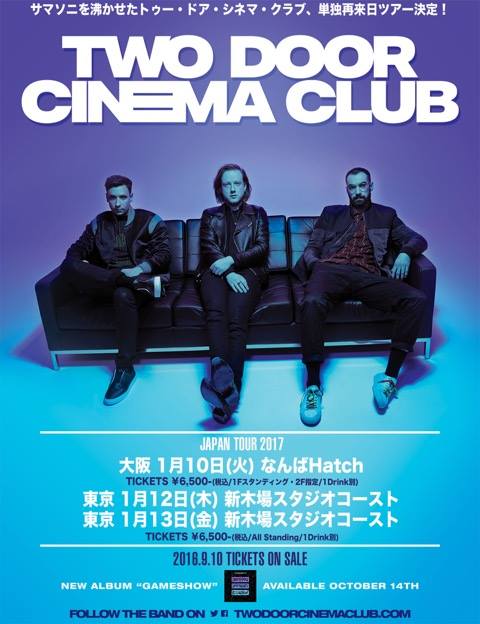 As you all probably know, Two Door were at Reading & Leeds this weekend, you can watch their set here. What you may not know is that on Friday night, hours before their wonderful performances in the UK, they played Rock en Seine in Paris. I was lucky enough to be there and needless to say they were the absolute best, as always. They looked and sounded great, even since last May I could see changes, especially in Alex who seemes so much more comfortable on stage. They played Are We Ready? (Wreck) and Bad Decisions which was of course very exciting, and they even spoke un petit peu français which was nice. The only thing missing was Handshake which sadly wasn’t on the setlist, though I only realised that afterwards as I was too happy during the actual gig! I’ll share photos + a link to watch their set in Paris soon enough!
Thanks again to Two Door for yet another amazing performance, I can’t wait to see you again!

We had a wild one night in Paris. Thanks for having us @rockenseine. Great to see old buds @bastilledan today too

They were selling some new merch at the festival, I didn’t buy anything there and then as I was already wearing my red Two Door shirt and had colour coordinated everything to go with it right down to my socks, however I do intend to get one during their next european tour whenever that is! If you guys can’t wait for a gig to get one and wish to be fully Gameshow prepared for their next show near you don’t worry, their new merch is also available online! Check out their three new t-shirts here (and possibly help me decide which one to get?!)!

I’ll be back in touch soon, hopefully the band will announce some more tours soon so us european basement people will have something to be excited about! To help us wait, the band have been releasing short clips from their upcoming documentary, check them out here. Until then, keep being the best fan community around and keep in touch via twitter and instagram!